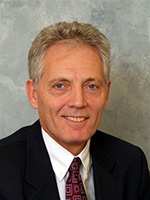 Tony has nearly 40 years experience in local government, firstly with the former Glamorgan Education Authority before moving into Social Services with Mid Glamorgan County Council. He became a director with Bridgend in 1999 where he managed the full range of social care and housing services. Latterly, he was responsible for leading the Council’s transformational change programme.

Tony is a former policy adviser to the Welsh Local Government Association on Social Services and community safety issues and was spokesperson on workforce issues for ADSS Cymru. His communication skills resulted in him frequently commenting on social care matters on radio, television and national journals. He also played a major role in responding to the worldwide publicity arising from the premature deaths of a number of young people in the Bridgend area in 2008.

He has been a member of a number of national bodies, including the Care Council for Wales where he chaired the Workforce Development Committee. He was a Board Member of the UK Alliance (Sector Skills Council for Care and Development). Most recently he was a member of the Welsh Assembly Government’s Advisory Panel on Substance Misuse and has practised as an executive coach and mentor.

Highlights of Tony’s career include successfully leading the first whole scale voluntary housing stock transfer in Wales and being the author of ‘Social Work in Wales: A Profession to Value’, a major research project on the recruitment and retention of social workers which became universally referred to as the ‘Garthwaite Report’. He recently produced new guidance for local authorities in Wales on collaboration and governance in social services.